Variety of Drawing Materials and the World of Shakespeare

A prolific draughtsman, Roseman employs a variety of drawing materials with great versatility. With a combination of pen, brush, and bistre ink, ''Stanley Roseman did a set of exquisite drawings of Morris Carnovsky as King Lear,'' writes Dr. Richard Studing in his catalogue to the exhibition Fantastic Shakespeare, The Gallery, Stratford, Ontario, 1978.

The artist drew the powerful portrait, reproduced here, (fig. 1), of Morris Carnovsky, in performance in his acclaimed role as the tragic and suffering old king in the 1975 American Shakespeare Festival production of King Lear. One of the greatest American actors to interpret the role, Carnovsky brought a maturity of years in a long and distinguished career and a penetrating depth of character to his portrayal of King Lear.

Roseman's fine pen and ink lines and detailed brushwork render the firmly set mouth, heavy cheeks, and dark eyes. Broad, calligraphic strokes of a brush loaded with bistre ink and wash in tandem with the subtle textures of dry brush describe the mass of hair, beard, and shoulders and dramatically place the figure in pictorial space. The sculptural quality of this masterful drawing with strong chiaroscuro modeling intensifies the psychological impact as Lear's dark eyes under anguished brows directly confront the viewer.

''Stanley Roseman did a set of exquisite drawings
of Morris Carnovsky as King Lear.''

The drawing of James McCracken in his outstanding performance as Otello in Zeffirelli's production of Verdi's opera, reproduced on page 1 of the Biography, has a lively use of pen and bistre ink, with curvilinear and parallel strokes and cross-hatching in Roseman's rendering of the figure, the objects in Otello's study, and the stone column behind his desk. The pyramidal composition leads the viewer's eye up to the Moor's noble head with strong, facial features, dark eyes, and beard. A great sense of contained emotion is expressed in this superb drawing.

A complementary work in pen and bistre ink from Roseman's five seasons of drawing at the Metropolitan Opera is the impressive representation of Sherrill Milnes in the title role of Verdi's Macbeth, reproduced here, (fig. 2).

Macbeth, which had its world premiere in 1847, was the first of three Verdi opera's based on plays by Shakespeare and holds an important place in the composer's early career. Verdi, who greatly admired Shakespeare, turned to the dramatist for his last two operas: Otello (composed in 1887) and Falstaff (1893), which also provided Roseman with inspiration for his work at the opera.

Sherrill Milnes is highly regarded for his roles in the Verdi repertory, and the celebrated operatic baritone's portrayal of Macbeth was a fascinating subject for Roseman's work. With an economy of vigorous strokes of the pen, the artist captures on paper the violent action and feverish intensity of Macbeth as he brandishes a sword in his upheld hand.

The pencil is for Roseman an indispensible drawing instrument and is his preferred medium for drawing the dance. Concluding his discourse on the use of the pencil in his text to the fine art book Stanley Roseman and the Dance - Drawings from the Paris Opéra, the artist writes: "Pencil is a drawing instrument by which I could explore an extensive range to the quality of the line, not only to express the human form in changing patterns of dance movements but also to carry and transmit in a graphic medium the kinetic energy of the dancer."

The balletic version of Romeo and Juliet, choreographed by Rudolf Nureyev to Serge Prokofiev's symphonic score, presented by the Paris Opéra Ballet provided Roseman with the extraordinary opportunity to draw three great ballerinas identified with the role of Shakespeare's tragic heroine.

At the American Shakespeare Festival

At the Metropolitan Opera

At the Paris Opéra

Roseman returned to the world of Shakespeare with the Paris Opéra Ballet's presentation in 1991 of José Limón's best known choreography The Moor's Pavane. A stately court dance of the sixteenth and seventeenth century, the pavane provides the choreographic structure for this compelling work considered a classic of modern dance. Two couples - Othello and his faithful wife Desdemona, and the treacherous Iago and his wife Emilia - play out the events of Shakespeare's epic tragedy as they dance to excerpts from Henry Purcell's Abdelazer (1695), one of the composer's most enduring suites for the theatre.

Paris Opéra star dancer Michaël Denard is seen as Othello in the drawing reproduced below, (fig. 3). Roseman renders the voluminous robes with sweeping strokes of the graphite pencil in dramatic contrast to the full modeling of the face with strong highlights and dark shadows. The artist's instinctive decision in the creative process to emphasize the mental turmoil of Othello brings the viewer's attention to the intense expression on the face of a man obsessed by the thought that his wife has been unfaithful to him. Opposing emotions of love and hate are indicated by the sweeping gesture of Othello's sleeve, as if to sweep away nightmarish thoughts; the countermovement of the Moor's garments; and the striking contrapposto of the figure advancing forward and simultaneously turning to look behind him.

The Musée Ingres, Montauban, conserves a related Roseman drawing of Denard as Othello, along with the present work portraying Denard and Paris Opéra star dancer Charles Jude as Iago, (fig. 4), in their memorable performance of The Moor's Pavane. The Musée Ingres houses an important bequest by the French master to his hometown, which includes an extensive corpus of Ingres's drawings, with numerous sheets in his preferred drawing medium of pencil. 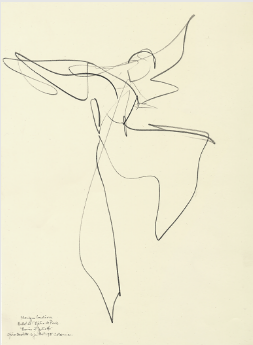 "The drawings that you so thoughtfully brought to us are superb.
I love immensely the drawings of the dancers,
which have an astonishing spontaneity of action and of refinement....
Please convey my congratulations to Monsieur Stanley Roseman for the great quality of his drawings.
We are proud to incorporate the work in our collection."

Paris Opéra star dancer Monique Loudières danced the role of Juliet at the premiere performance of Nureyev's ballet at the Paris Opéra in 1984. The celebrated ballerina brought a passionate interpretation to the role, which she reprised over the years, always to great acclaim. Reproduced here, (fig. 5), is Roseman's impressive drawing Monique Loudières, 1995, in the British Museum, London.

Paris Opéra star dancer Elisabeth Maurin was a sujet in the corps de ballet when Rudolf Nureyev, as Director of the Dance of the Paris Opéra, selected her in 1985 to dance for the first time the demanding role of Juliet. Nureyev promoted Elisabeth Maurin in December 1988 to the culminate rank of étoile. Esteemed as a great dramatic ballerina, Elisabeth Maurin's portrayal of Shakespeare's tragic heroine became one of the star dancer's most acclaimed roles.

Nureyev choreographed his first production of Romeo and Juliet for the London Festival Ballet in 1977, with the English prima ballerina Patricia Ruanne dancing Juliet to his Romeo. When Nureyev was appointed Director of the Dance at the Paris Opéra in 1983, he invited his distinguished partner to be his assistant in overseeing rehearsals and performances. Ruanne was later promoted to Ballet Master of the Paris Opéra. After Nureyev retired from the company's directorship in 1989, Ruanne had responsibility for remounting Nureyev's ballets. Thus a wonderful series of events enabled Roseman to draw Nureyev's first Juliet in his own choreography as Ruanne danced passages of the ballet in her demonstrations at rehearsals and relived her great role as Shakespeare's tragic heroine.


The beautiful and poignant drawing of Patricia Ruanne as Juliet, reproduced here, (fig. 7), is conserved in the Palais des Beaux-Arts, Lille. The museum contains a renowned collection of Master Drawings, notably from the Italian Renaissance, including an outstanding group of drawings by Raphael, as well as drawings from the major French, Flemish, German, and Dutch schools. 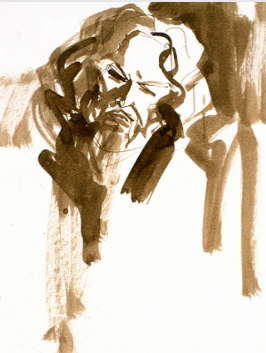 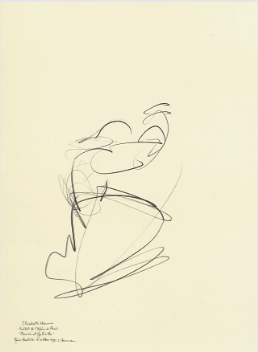 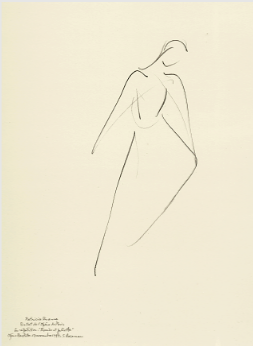 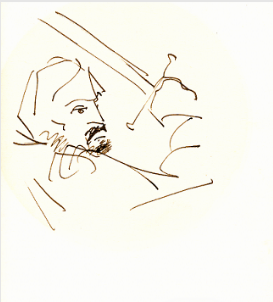 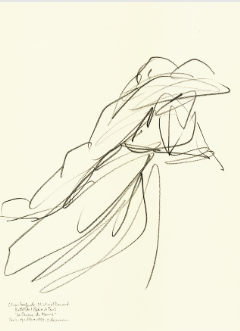 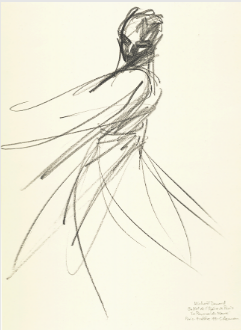 In acquiring a suite of Roseman's drawings for the Palais des Beaux-Arts, the distinguished Curator of Prints and Drawings Barbara Brejon de Lavergnée writes in a cordial letter to the artist's colleague Ronald Davis:

With a brilliant use of line, the artist captured on paper the star dancer at a climactic moment in the ballet when Juliet rushes into the crowd of feuding Capulets and Montagues to discover the body of her cousin Tybalt, who has been killed in a fierce duel with Juliet's beloved Romeo. Roseman's continuous pencil line - like a flash of lightning - is charged with emotion expressing at once the outward kinetic movements of the dancer and the inner turmoil of Juliet as she thrashes with conflicting feelings of family loyalty to her cousin and devotion to her lover.

The Musée des Beaux-Arts, Bordeaux, acquired the superb drawing, (fig. 6), imbued with pathos in portraying Elisabeth Maurin as Juliet. Alone on stage, the dancer was confronting the darkening events in Juliet's life when the artist, standing in the wings, created this compelling work. Roseman's nuanced, spiraling pencil lines - from threads of light gray to dark ribbon-like strokes - describe a desperate Juliet falling to her knees, her head bent low and covered by the voluminous material of her sleeve as she raises an arm into the air. Roseman renders the dance movements with a spiral leitmotif to the drawn line and in so doing conveys the mental state of Juliet and her whirl of emotions.

Roseman transposes with a purity of line the dance movement onto the paper. Silvery pencil lines bring the viewer's eye to the accented strokes of the rising shoulders, the graceful ''S'' curve of the dancer's neck, and her lovely shaped head inclined to the side. A great tenderness of feeling is expressed in this eloquent, ethereal work.

Roseman's dynamic composition places both figures diagonally across the paper, with Iago clinging to the back of Othello as he struggles forward, their faces obscured by Iago's outstretched arm. This remarkable drawing of Iago and Othello speaks of their complicated and turbulent relationship.

Page 2  -  Variety of Drawing Materials and the World of Shakespeare

Page 5  -  The Saami People of Lappland