DANCE
from New York to Paris

Reproduced here from The Performing Arts in America exhibition are two superb drawings of Mikhail Baryshnikov and Rudolf Nureyev.

Whereas artists who have taken up the subject of the dance in their work have more often depicted the female dancer, Roseman concentrates equally on drawing the male dancer. Roseman presents the male dancer in many different stage personae and in a wide range of dance movements and brings a modernism and importance to the male dancer in art. 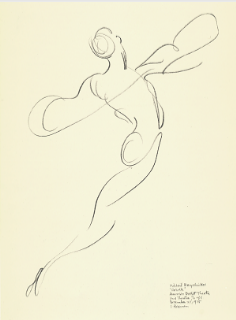 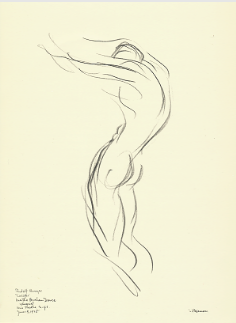 The Albertina, Vienna, conserves the drawing Mikhail Baryshnikov, 1975, (fig. 2). With the silvery tones of a graphite pencil, Roseman drew Baryshnikov as Duke Albrecht in the American Ballet Theatre's production of Giselle. The great Romantic ballet, with a haunting scenario by Théophile Gautier and memorable score by Adolphe Adam, was commissioned by the Paris Opéra and had its world premiere in 1841. At the Opéra in 1991, Roseman had the wonderful opportunity to draw at performances of Giselle when the Paris Opéra Ballet celebrated the 150th anniversary of the ballet.

From New York City, where the artist drew at dress rehearsals and performances in theatres and opera houses, to the Paris Opéra, the Dance holds an important place in Roseman's oeuvre. With a passion for drawing and a love for the dance, Roseman states: "I felt the dancer's language in harmony with my own as a draughtsman.''[1]

In the fine art book Stanley Roseman and the Dance - Drawings from the Paris Opéra, Roseman recalls the outset of his career in New York City in the early 1970's: "As I embarked on my career, drawings became an increasingly important part of my work, not as studies or preparatory sketches for my paintings, engravings, and sculptures, but as works complete unto themselves. I was absorbed with the human figure, and in addition to drawing portraits and nudes, for example, I found inspiration in the world of the performing arts where I drew in theatres, opera houses, and at the circus.''[2]

The Performing Arts in America Exhibition

The American bicentennial exhibition Stanley Roseman - The Performing Arts in America presented the artist's drawings of celebrated singers, actors, dancers, and supporting players and members of the chorus and the corps de ballet in a spectrum of memorable cultural events from the exciting world of the performing arts.

Dance companies headquartered in New York City, including the American Ballet Theatre, with Mikhail Baryshnikov, (fig. 2, below), and the Martha Graham Dance Company on the occasion of the company's 50th Anniversary, in 1975, with Rudolf Nureyev, (fig. 3, below), were represented in the exhibition along with other ballet and modern dance companies from abroad.

Roseman's work encompassed theatre productions on Broadway and Off-Broadway; at the Kennedy Center for the Performing Arts, Washington, D.C.; and the American Shakespeare Festival, Stratford, Connecticut.

The exhibition also presented the artist's paintings and drawings from his sojourns with the famous Ringling Bros. and Barnum & Bailey Circus, where, in the private backstage realm known as "Clown Alley,'' Roseman created a highly praised work on the subject of the circus clown -  ''one of the glittering joys of all of our lives, whether we are young or old,'' states The New York Times in its superlative review entitled ''Spirit of the Clown'' and subtitled ''Paintings by Stanley Roseman glow with a shiny dignity.''

The Performing Arts in America exhibition, produced by Ronald Davis, opened on the eve of the American bicentennial celebrations in December 1975 in the historic city of Philadelphia, where the Declaration of Independence was adopted by the Continental Congress on July 4, 1776. The Curtis Institute of Music, one of the world's leading music conservatories, presented the Roseman exhibition in Philadelphia, and thereafter the exhibition toured the United States through 1976. ''The moments Roseman has captured are many and varied,'' wrote The Saratogian, Saratoga, New York, ''and a walk through the exhibition is a trip through what will be our cultural heritage.''

The Roseman drawing of Nureyev depicts the dancer in the title role as the fallen angel of classical antiquity - Lucifer, ''the bearer of light.''

In this dynamic drawing the flame-like rendering of the dancer's arms, head, and shoulders contrasts with the solidity of the arched back, taut stomach, muscular legs, and pelvic thrust. Roseman's drawing vividly expresses the bodily contraction and weightiness that typifies the choreography of one of the pioneers of modern dance.

In 1989, Stanley Roseman received a prestigious invitation from the administration of the Paris Opéra to draw the Paris Opéra Ballet. With great enthusiasm Roseman resumed drawing the dance. His extensive and highly praised work culminated with the exhibition of "a hundred magnificent drawings'' presented in 1996 by the Bibliothèque Nationale de France and entitled Stanley Roseman - Dessins sur la Danse à l'Opéra de Paris.[4]

The drawing of Baryshnikov is atypical of the frontal position in which dancers are usually depicted in art. Baryshnikov is seen moving upstage in a curvilinear composition focusing on the turn of the dancer's head and outstretched arms beneath voluminous sleeves. With a minimum of line, Roseman creates a splendid abstraction of the male dancer in flight.

The complementary drawing Rudolf Nureyev, 1975, today in the Israel Museum, Jerusalem, captures with pencil on paper Nureyev dancing for the first time in a choreography by Martha Graham on the occasion of the 50th anniversary of the Martha Graham Dance Company, (fig. 3). Graham is quoted as saying of Nureyev, ''This is the only time that I've lived through another person in movement.''[3] 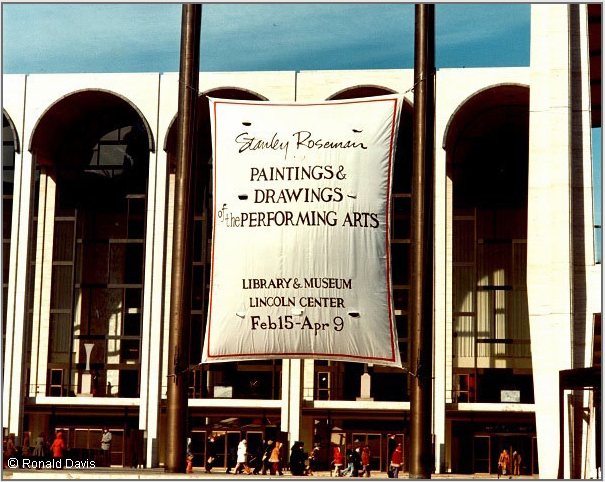