The Ballets Russes' famous production L'Après-midi d'un Faune has been revived with great success by the Paris Opéra Ballet and is included in the Company's standard repertory.

''At the outset of my work at the Paris Opéra, in January 1990,'' recounts Roseman, "I had the wonderful opportunity to draw star dancer Charles Jude in L'Après-midi d'un Faune. Charles Jude interpreted the role of the Faun in 1976, the year the ballet entered the repertory of the Paris Opéra Ballet, and is acclaimed for his performances of the sensual Faun, as well as for other memorable balletic personages, including Petrouchka from the repertory of the Ballets Russes.''

In a text to accompany his drawings at the Paris Opéra, Roseman writes: "The idea for a ballet about the amorous yearnings of a faun on a summer afternoon derives from Stéphane Mallarmé's Symbolist poem L'Après-midi d'un Faune, published in Paris in 1876.

"Serge Diaghilev, the impresario of the Ballets Russes, entrusted the choreography of L'Après-midi d'un Faune to Vaslav Nijinsky, his first venture as a choreographer. Nijinsky worked in collaboration with Leon Bakst, who designed the sets and costumes.

"Claude Debussy was inspired by Mallarme's poem and composed Prélude à l'Après-midi d'un Faune, which premiered in Paris in 1894 at the Société Nationale de Musique. The Prélude has become one of the most celebrated works of modern music.

"Nijinsky developed his choreographic tableau to the impressionist imagery evoked by Debussy's music. The dancers' stylized, angular movements are seen mostly in profile and are reminiscent of figures on Greek (Attic) vases from the fifth to fourth centuries B.C.[1] The Ballets Russes presented the world premiere of L'Après-midi d'un Faune, conducted by Pierre Monteux, at the Théâtre du Châtelet in Paris in 1912." 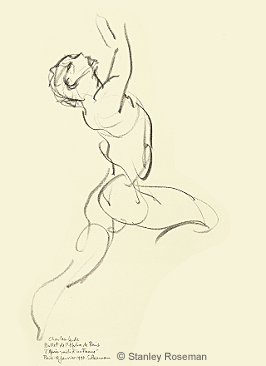 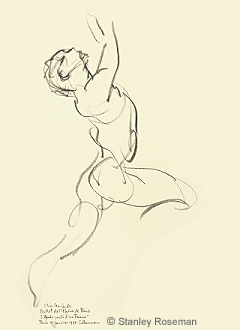 This page will present further work by the artist from L'Après-midi d'un Faune.
Please return again.

"Doris Monteux wrote a loving memoir of her husband and quotes the Maestro's early admiration for Debussy's music: 'I was young, and I found his music subtle and intriguing. I fell in love with all of it…'[2]

On a summer afternoon, a faun, perched on a hillock, watches a gathering of seven nymphs. The Faun approaches, and they soon flee, save for one nymph who has disrobed to her undergarments to bathe in a stream. Lingering, she entices the Faun and intertwines her arms with his in a suggestive dance movement. The nymph then also departs, leaving her diaphanous scarf on the ground. The Faun retrieves the scarf and inhales its female scent. Carrying his trophy, the Faun, taking deliberate steps, ascends to his perch, smoothes out the material, and gently lowers himself onto the nymph's scarf. With a sudden bodily thrust upward, the Faun reaches a climax. As Debussy's music subsides, the Faun reposes and the curtain falls.

The Bibliothèque Nationale de France conserves Roseman's superb drawing Charles Jude, 1990, presented at the top of the page and below, (fig. 3). Drawn from the perspective of the audience, the Paris Opéra star dancer as the Faun is seen in profile in keeping with the choreographic style of L'Après-midi d'un Faune.

Roseman has beautifully expressed the sensuality of the male dancer and the personage of the amorous Faun, skillfully portrayed by Charles Jude in this classic work of modern dance.

"Stanley Roseman's drawings show the many facets of his great talents as a draughtsman.''[4]

"The music of Debussy was familiar to me from my own youth when I heard the Prélude à L'Après-midi d'un Faune at a marvelous concert conducted by Pierre Monteux at the Tanglewood Music Festival in the Berkshires in western Massachusetts. Staying with my parents in the same hotel as the eminent French-born conductor and Madame Monteux, I had the wonderful experience of becoming friends with the respected couple. As well as painting and drawing, I was studying piano at the time. The Maestro and Madame Monteux greatly encouraged me in my interests in music and art.''[3]

Page 3 - The Rite of Spring